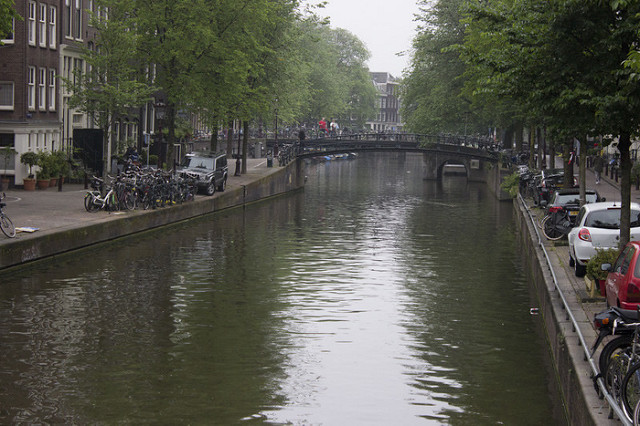 Home Amsterdam Take me back to Amsterdam

Take me back to Amsterdam

Last year, as I’m sure some of you already know we went traveling round Europe, I’ve already written about my time in Paris and the beautiful mountains in Switzerland  but I haven’t told you about when we went to Amsterdam.

We took an overnight train from Germany (Munich to be precise) into the very heart of the Netherlands, Amsterdam. I had so many people who said that they loved Amsterdam when they visited and how they so badly want to go back, so naturally I wanted to visit and to see what was so special about it.

As I was saying, we took an overnight train throughout Germany and into Amsterdam. The first thing that strikes me was how many bicycles there were. Seriously, as soon we stepped out of the train station we saw hundreds and hundreds of bicycles – yup we most definitely were in the right place. I’ve been told that bicycles out sold cars but woah! I was surprised how many bicycles there were. This to me was really nice as it made the air a lot fresher, it wasn’t a polluted city and all you had to be careful were not to be in someone’s way while they were riding.

We decided to visit the Anne Frank museum – actually I decided and I dragged Richard along with me. I made a promise to myself that one day I will visit this and when the opportunity came up I was sure to follow through with it. Anyway we were warned that to get in it is a long – very long – queue, some people I spoke to before we went said they queues for 4 hours. We however were a little luckier and only queued up for 3 hours. Yes you read that right, 3 hours of standing into a queue waiting to go into the museum. 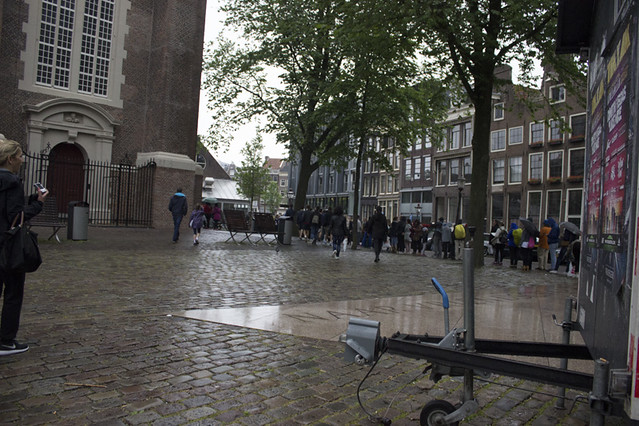 This is just a glimpse of the queue but you get the idea. So was it worth it? Yes is the answer, it was very interesting inside the Anne Frank museum. If you don’t know what this museum is about, this was where she along with her family hid during the Nazi occupation, and after the war her father opened it to the public as a lesson to people so nothing like that would happen again in history.  It was a very steep and small the area where she lived during those times, you feel what her and the family went through. If you do visit Amsterdam I do recommend visiting the Anne Frank museum.

After that we walked around and took in the sights: 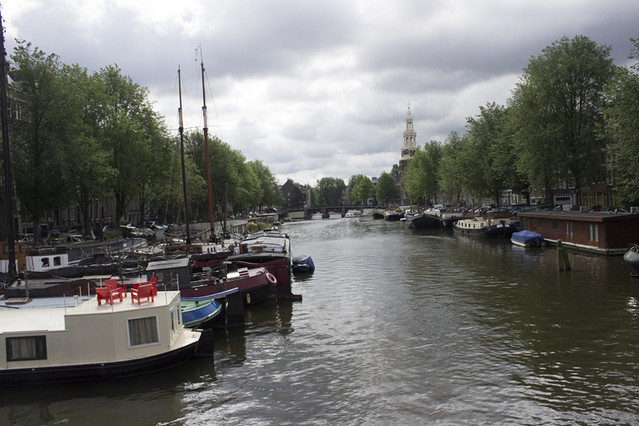 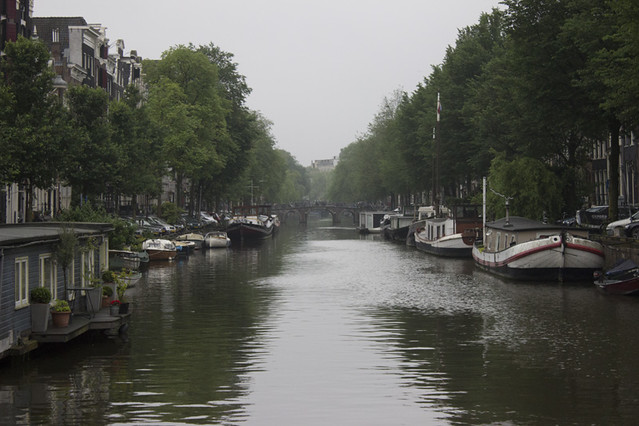 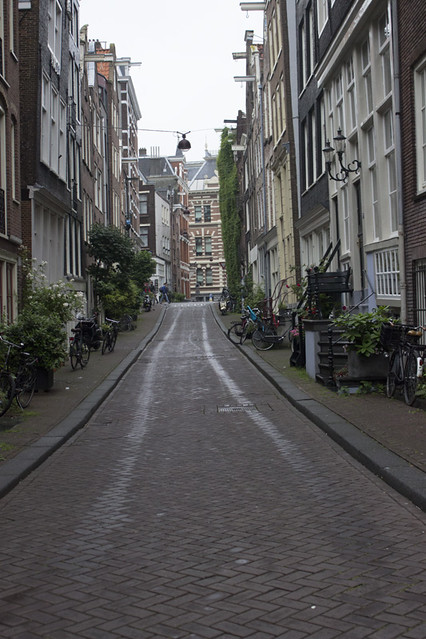 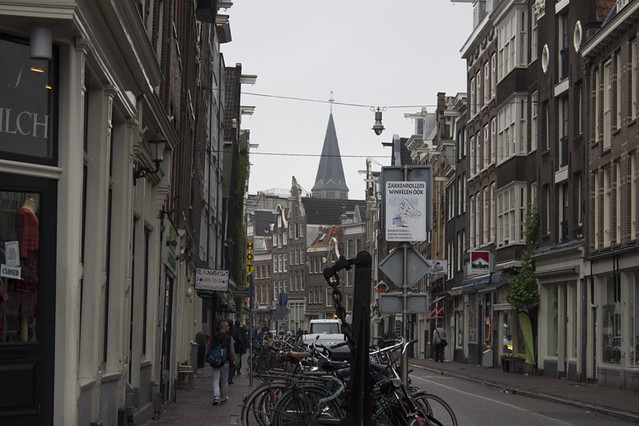 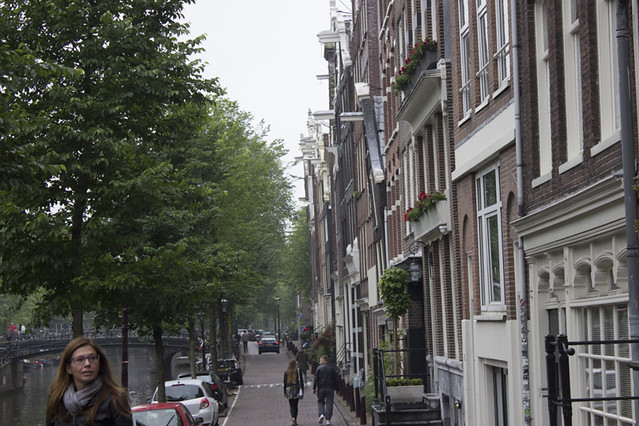 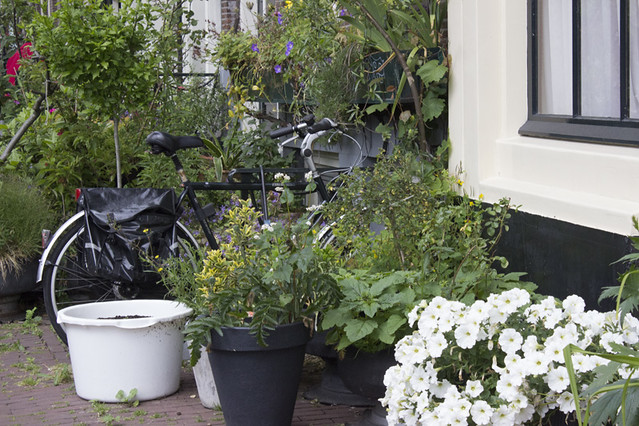 Lots of narrow streets and canals, it certainly gave the city some charm and I made a promise that next time I come back I would ride on a riverboat down the canal.

If I have to be summed up the city it would be that it overall felt like a giant student campus. It has a very young spirit and there was loads of really quirky boutiques that I kept wanting to go in.

I would go back in a heartbeat and I keep looking at cheap deals on various traveling websites as it is only the prices that are stopping me right now.

So if you want to visit a quirky (and Amsterdam is very quirky) rustic charming city then GO NOW! As trust me you won’t regret it.

The Ragged Shipped Wrecked Skirt On A Beach

I’ve always wanted to visit amsterdam and not sure why i’ve never done it since it’s not too far for me to travel, these photographs and this blog and inspired me to take a trip 🙂

I have friends who have visited Amsterdam and they’ve told me how amazing it is. Beautiful photos!

So gloomy, but so beautiful! I can’t wait to visit!

Amsterdam is on my husband and I’s list of places to visit! It seems so quaint and I absolutely love the architecture. Seemed like you had such a lovely vacation! 🙂

I need to go back too! It’s such a gorgeous city, I can’t even with all the beauty!
Beautiful pics 🙂

PepiSmartDog: gorgeous photographs!
Thank you for the photo tour. Really enjoyed it.
Thank you for joining our Thankful Thursday Blog Hop each week.
Hope to see you again this week too. *waves paw* :=o)

Lovely photos. Amsterdam has been on my must visit list for a while. Time to book my flight!
xx
A

My ex-husband had 3 days there a few days ago. He enjoyed the Van Gogh museum. It’s a terrific city.

I spent five nights camping in the most fabulous campground in the centre of Amsterdam. I’d love to return to the city one day (besides the stop-over I’m doing there in two weeks!). Gorgeous place to visit. 🙂