Open
A photo of some roses which I forgot to post. Thin

Open
Oh hello, June, where did you come from? Seriousl

Open
Usually, when I do an outfit post or picture, I li

Open
If I were to describe my style, it would be summed

It the season to be jolly, to have a good ole’ laugh and to lighten up on any worry you might have. This is not the time to sit at home and be a real old scrooge, instead pull a cracker, tell a few jokes and smile all day long. If you’re feeling a little light on the joke department then I have you covered! I present you a few light-hearted cheer to help you feel all merry and jolly, jokes you can share with your friends and family on Christmas day. There no hum-bug here thank you very much! So pour some mulled wine and take a comfy seat and let have some Christmas humor.

Listen you fat little troll, I’ve been helping you out every year, playing at being the perfect Christmas Present, wearing skimpy bathing suits in frigid weather, and drowning in fake tea from one too many tea parties, and I hate to break it to ya Santa, but IT’S DEFINITELY PAY BACK TIME!

There had better be some changes around here this Christmas, or I’m gonna call for a nationwide meltdown (and trust me, you won’t wanna be around to smell it). So, here’s my holiday wish list for 2015. . .

1) A nice, comfy pair of sweat pants and a frumpy, oversized sweatshirt. I’m sick of looking like a hooker. How much smaller are these bathing suits gonna get? Do you have any idea what it feels like to have Nylon and Velcro up your butt?

2) Real underwear that can be pulled on and off. Preferably white. What bonehead at Mattel decided to cheap out and MOLD imitation underwear to my skin?!? It looks like cellulite!

3) A REAL man. Hey, maybe GI JOE. Hell, I’d take Tickle-Me-Elmo over that wimped out excuse for a boy toy Ken. And what’s with that earring anyway? If I’m gonna have to suffer with him, at least make him (and me) anatomically correct.

4) Arms that actually bend, so I can push the aforementioned Ken-wimp away once he is anatomically correct.

5) Breast reduction surgery. I don’t care whose arm you have to twist, just get it done.

7) A new career. Pet doctor and school teacher just don’t cut it. How about a systems analyst? Or better yet, a public relations senior account exec!

8) A new, more 90’s persona. Maybe “PMS Barbie”, complete with a mini container of chocolate chip cookie dough ice cream and a bag of chips; “Animal Rights Barbie”, with my very own paint gun, fitted with a fake fur coat, bottle of spray on blood and handcuffs; or “Stop Smoking Barbie,” sporting a Nicotrol patch and equipped with several packs of gum.

9) No more McDonald’s endorsements. The grease is wrecking my vinyl.

Okay Santa, that’s it. Considering my valuable contribution to society, I don’t think these requests are out of line. If you disagree, then you can find yourself a new girl for next Christmas. It’s just that simple.

A new contract for Santa has finally been
negotiated . . . Please read the following carefully.

I regret to inform you that, effective immediately, I will no longer be able to serve Southern United States on Christmas Eve. Due
to the overwhelming current population of the earth, my contract was renegotiated by the North American Fairies and Elves Local 209. I now serve only certain areas of Oregon, Nevada, Washington,
Montana and California. As part of the new and better contract I also get longer breaks for milk and cookies so keep that in mind.

However, I’m certain that your children will be in good hands with your local replacement who happens to be my third cousin, Bubba Claus. His
side of the family is from the South Pole. He shares my goal of delivering toys to all the good boys and girls; however, there are a few
differences between us.

1. There is no danger of a Grinch stealing your presents from Bubba Claus. He has a gun rack on his sleigh and a bumper sticker that reads: “These toys insured by Smith and Wesson.”

2. Instead of milk and cookies, Bubba Claus prefers that children leave an RC cola and pork rinds [or a moon pie] on the fireplace. And Bubba
doesn’t smoke a pipe. He dips a little snuff though, so please have an empty spit can handy.

3. Bubba Claus’ sleigh is pulled by floppy-eared, flyin’ coon dogs instead of reindeer. I made the mistake of loaning him a couple of my reindeer one time, and Blitzen now overlooks Bubba’s fireplace.

4. You won’t hear “On Comet, on Cupid, on Donner and Blitzen …” when Bubba Claus arrives. Instead, you’ll hear, “On Earnhardt, on Wallace, on Martin and Labonte. On Rudd, on Jarrett, on Elliott and Petty.”

6. As required by Southern highway laws, Bubba Claus’ sleigh does have a Yosemite Sam safety triangle on the back with the words “Back off” The
last I heard it also had other decorations on the sleigh back as well. One is Ford or Chevy logo with lights that race through the letters and the other is a caricature of me (Santa Claus) going wee wee on the Tooth Fairy.

7. The usual Christmas movie classics such as “Miracle on 34th Street” and “It’s a Wonderful Life” will not be shown in your negotiated viewing area. Instead, you’ll see “Boss Hogg Saves Christmas” and “Smokey and the Bandit IV” featuring Burt Reynolds as Bubba Claus and
dozens of state patrol cars crashing into each other.

8. Bubba Claus doesn’t wear a belt. If I were you, I’d make sure you, the wife, and the kids turn the other way when he bends over to put
presents under the tree.

9. And finally, lovely Christmas songs have been sung about me like Rudolph The Red-nosed Reindeer” and Bing Crosby’s “Santa Claus Is Coming to Town.” This year songs about Bubba Claus will be played on all the AM radio stations in the South. Those song title will be Mark
Chesnutt’s “Bubba Claus Shot the Jukebox” and “Grandma Got Run’d Over by a Reindeer.”

Joke 5.
Q: Why did Frosty the Snowman pull his pants down?

A: He was waiting for the snow blower. 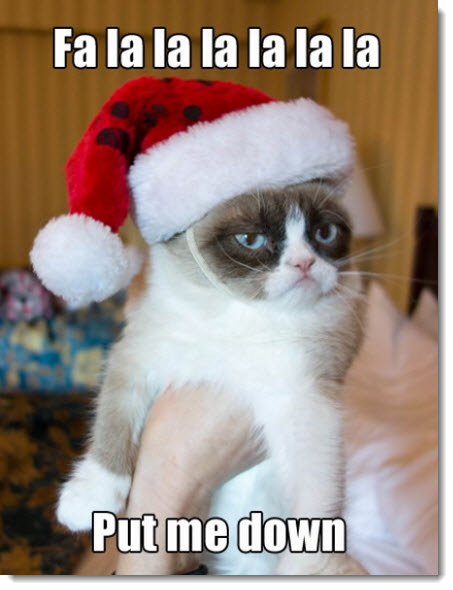 Photos Of My Christmas Tree

10 Things That Have Made Me Happy This Week