I like to keep you updated every so often on what is going on with my life and in a way keep myself informed as well. So here a page from my diary – my life story with pigeons and FitBit.

I always been a shy quiet private girl who keep to herself and not really telling people my business. If people would ask me on what I’ve been doing lately, my answer would always be ‘not a lot’.  Oh my poor mum use to despair when I would get in from school and she asked me on what I did that day, ‘not a lot’, would always be my answer. The truth of the matter a lot of the time I just didn’t feel comfortable talking to people and just wanted to be left alone. I enjoyed sitting in my bedroom with my Walkman listening to music or find a quiet corner to read my book. That was me for a long time, it was only till I met Richard that I felt comfortable opening up and telling people my business, it also might help that I’m older and little bit wiser. Well most of the time ‘wiser’ anyway, I still say ‘not a lot’ to my mum when she asked me. Something never do change.

The point of this little ramble is I’m trying to be more open and to tell you more about myself. What the point of having this blog as my name if I’m not going to tell you anything about myself. So without further rambling, I shall give you a page from my diary entries and tell you on what been going on with me lately.

Oh god! Pigeons are a bloody nuisance. I wish they all would just bugger off somewhere else.  Since we moved into our place we never had a problem – but it all changed last year.

We had a notice though our door that the building management are wanting to put netting up on our balcony. I off course was bloody outrage. The netting would be right across our balcony and abstract our view – meaning all we see was some black netting instead of the pretty park. Apparently some neighbours were complaining of pigeon’s problem and the building management decided the best course of action was to put netting up. To cut a long story short – we had the netting up and Richard and I was disgusted by it and bloody furious. We brought this place and this was our home. The big selling point for us was to have a balcony where we can sit and admire the view. So we eventually took the netting down and that was that. Everything was fine and we had no problem.

Over the period of the last months or so we been having a little bit of a pigeon’s problem – just our luck!! We discovered those pesky birds like to sit on our outside light. I first time I notice it when I could hear a pigeons cooing right by my window where the light is.  The worst part is these pesky pigeon’s kind of made a proper mess of our balcony.

We decided not to involved the building management and we would sort it out ourselves. Nothing to drastic – no we didn’t install a device that shot poison arrows every time a pigeon’s land on our balcony.  Though it was a tempting thoughts. We decided to put pigeons spike on top of our lights to stop them landing on it and making a right mess.

It was fairly easy to put up and it does seem to be effective. For the moment it seems the pigeons spike have done the job well.  Ok pigeons still lands on our balcony but I now run out there and tell them to bugger off. However, it seems to be a stop off point to fly off to the next destination.

But to be honest we not really using the balcony as it too cold to sit outside at the moment. But comes spring/summer we want to use our balcony (trust me during those months – it a bloody sauna here) we will want to sit outside so this is why we sorting out this problem now

So my advice is, if you have pigeon’s problem – just use pigeons spike. Effective and keep your outdoor clear. Those we still have to give our balcony a good scrub. That will be fun!! (not.)

Moving on, a week ago my mum got herself a FitBit. And for my mum this was this best invention since sliced bread. Ok maybe since the Iphone came out. You see mum and I share a love for all technology. The moment the Ipod came out – we both got one. When the Tom Tom (sat navigation system) was first introduced to the market – she was first in line to buy one. When I got an Ipad – she wanted one. See a pattern developing here. My mum read Stuff magazine (a UK technology and gadget magazine) and watches the Gadget show. 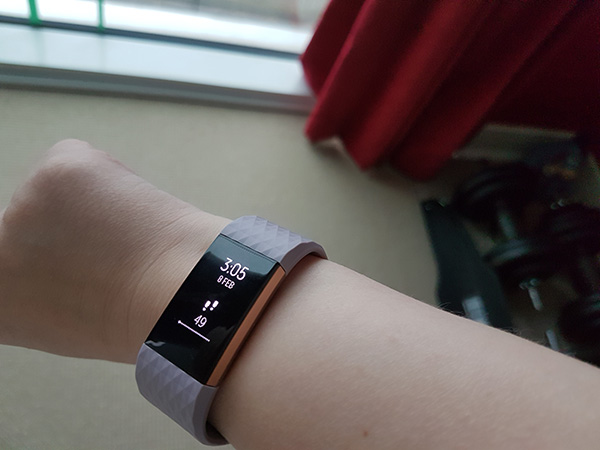 So it no surprise she would get a FitBit. I never been that fussed about it but after visiting my mum a few weekend ago I wanted one.  I brought my FitBit from John Lewis and It a been a bloody good investment let me tell you.

I kind of figure that it would motivate me to go out and I can keep a log of my exercise at the gym.

For my mum she has health issue (mum I know you read here and don’t you deny it to me next time we speak on the phone) so getting a FitBit was her way to go out and to keep a log on her day. She reckons she lost 2 stone from using it. She was telling me that she motivated to do 10,00 steps a day. So good on her.

Those I don’t know if I’d use it to keep a log of 10,00 steps – as I was saying, I would keep it as a log of exercises at the gym. I also like how the FitBit sync with my phone so I can keep a record of my log and can keep an eye in my progress.

So yeah I’m a little FitBit crazy at the moment. If you want a little device to get you moving, then I do recommend this.

I have quite possible talked a lot of rubbish – tell me what being going on with you lately?

Part 2 | Who Want Their Blog Reviewed?

The Reason On Why I Don’t Drive

Why I Hate Summertime

What In My Bag

Starting the week with positivity