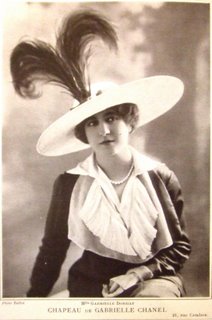 Gabrielle Chanel, more often known as Coco Chanel was a fashion couturier and often seen a pioneer in term of comfortable women wear.

“I make fashions women can live in, breathe in, feel comfortable in and look younger in’.
(History of the 20th century fashion, Elizabeth Ewing, New fashion makers 1920-1930, pg 100.)

Born 1883 and while having an unhappy childhood, she applied a tomboyish attitudes which would later she would applied to her clothes where she would take inspiration from men wear and of the working class. Chanel established her fashion shop in Deauville in 1913, in 1919 she was officially registered as a couturier and established her couture house.

Chanel in 1920 launches her masculine-style, plain sweaters over the pleated skirts with an easy jackets, it has a boyish relaxed charm without looking too clutters.  Her clothes designs all applied common sense, she applied practical pocket on where it was sensible to apply pockets, buttons should be buttons and garments to be mathematical. Her results avoided all the fussiness from pervious fashion trends and an acme of sophistication.

The one thing that should be noted was that Chanel was the very few couturiers who create clothes on the body rather than by making sketches of her designs. This resulted her creating clothes that were comfortable. The Chanel suit was designs to her taste but also to the women who would buy her designs, she liked simplicity style while also liking the muted colours of beige, chiefly grey and preferring materials such as flannels and the porridge-wool jersey.

The people who brought a majority of her designs and collections was the American who was captivated by Chanel, that they brought her models to be used in American fashion. Hollywood was also captivated by Chanel and did much promotion of the boyish ‘garconne’ fashions. 1922 the garconne style has the boyish silhouette of the slender flat-chested loose wearing comfortable clothes sporting a short haircut and wearing little makeup, it was considered at that time that it was Chanel who was the archetypal garcome. In 1924 Chanel designs the costumes for ‘Jeans Cocteau’s operette – danse, le Trains bleu ‘being performed at the ‘Theatre des champs – elyees Paris.  This in returns had a significant impact on fashions.

Coco Chanel in 1929 opens her couture house in Paris, it a boutique selling accessories such as scarves, handbags, belts and jewellery.

Amazing to read about the past of fashion, especially Chanel for me. I really love Coco Chanel perfume too, xoxo.

I know right, to this day celebrities are the main buyers of top brands like Chanel and I think they really help promote the brand to people who are necessary “following fashion trends”
xoxo
– Sierra Calah ♡ Berry Stylish