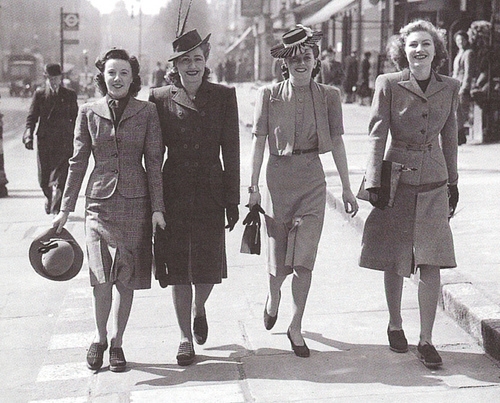 The 1940s Fashion were all about creating a certain silhouette. The wide padded shoulders, nipped in high waist tops, and A-line skirts that came down to the knee were all the rage. This was the everyday shape for clothing from suits to dresses. To put it simply, 1940’s fashions were all about the hour glass figure with broad shoulders, tiny waists and full hips. If you were not naturally an hour glass shape the clothes were designed to help you achieve the look.

Despite WWII, the 1940s were still a brilliant decade for fashion. Hollywood’s Golden Age glamorous women such as Rita Hayworth to Katharine Hepburn dazzled in gorgeous gowns.

With the start of the war and a strict rationing on fabric, dresses in the 1940s became shorter up to knee length. The war also affected the top of the dress as the neckline came in a variety of cut outs. They could be square, slit, sweetheart, keyhole, shirred, cross front wrap, or V with button down tops. There was never any cleavage! 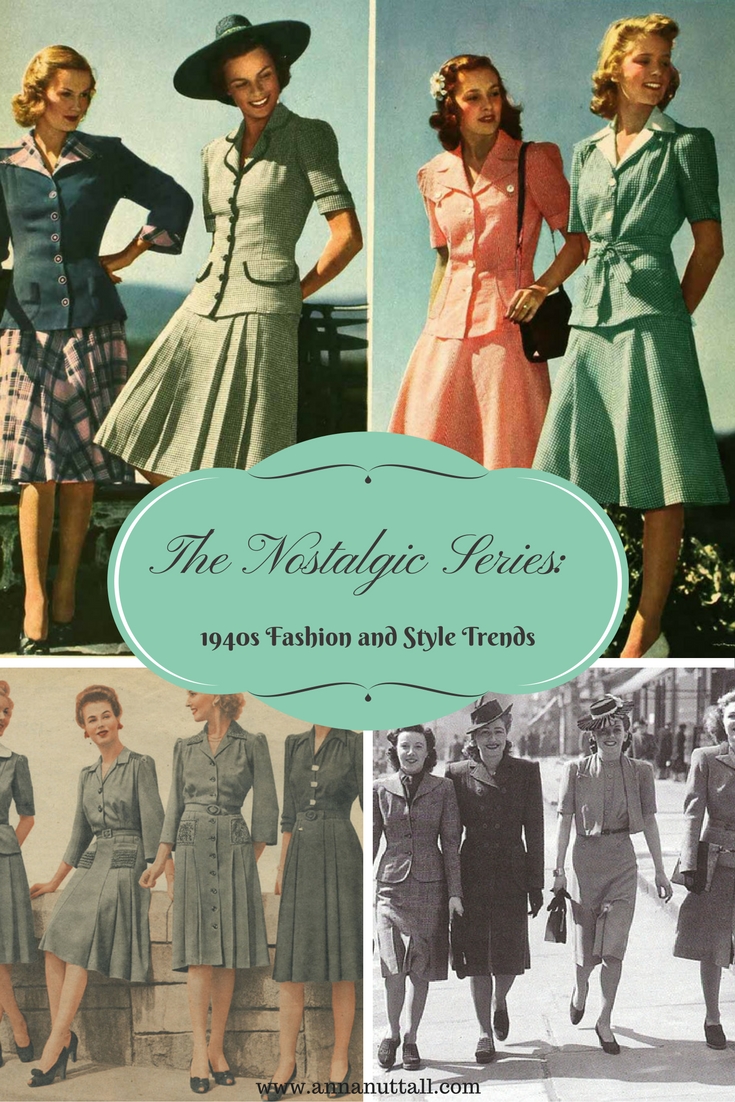 Another 1940s fashion aspect were the hair: which was worn long and curled at the ends for a soft, feminine look. Beauty salons can be expensive and women saved money by having their hair cut less often. As so many women enlisted in the military or took factory jobs, it was easy to tie long hair back for safety. Then, the long hair could be worn down for casual or dress occasions. Women often knit or crocheted snoods which were an attractive combination of a hair net and a veil.

The end of World War II did not immediately change the fashion industry. Clothing rations and fabric restrictions slowly changed as the economy went from war to peacetime.

In February of 1947, Christian Dior introduced his New Look, a style where hemlines were long in skirts and dresses with tons of fabric. Wide hats and tight nipped in waistlines gave women an almost antebellum look. The new female silhouette gave women an hour glass figure and a new, feminine extravagance so long denied.

A Short video to watch:

For me, this is a really lovely and interesting way in clothing! I would like to wear these clothes even now :)) ʕ•͡ᴥ•ʔ

You’re right the 40s fashion is fantastic. Really enjoyed your post! Look forward to more like it!